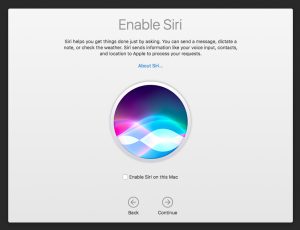 Do you really want to talk to your Mac?

In late September, Apple introduced Mac OS X.12, (Sierra) as a free upgrade, available (as usual) in the App Store. While there are some features that will have Apple fanboys and fangirls excited (Siri on the Mac, the ability to login to your computer via your Apple Watch), most of the action takes place behind the scenes. In other words, functional, but not all that exciting.

There have been a few small glitches with OS X.12. One is an incompatibility issue with Microsoft Office 2008. If you’re planning to upgrade to Sierra, then it’s time to move on from Office 2008, a software package that’s approaching its ninth birthday. Another is a strange pixilation of the print window in some programs (Adobe Acrobat, for example), but that appears to be only an aesthetic issue, not a functional one. And I’m reading of nightmares when mixing Sierra and QuickBooks, so if you’re a QB user, don’t even think of upgrading until you receive the “all clear.” 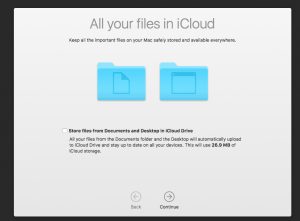 Think before blindly syncing your files to the cloud!

But the biggest issue I have discovered with updating to Sierra is during the configuration process, post restart, after the software has been downloaded and installed. There is an option to enable Siri (see graphic above), but the next one that comes along – to move all your documents into iCloud Drive – is troubling. That’s because you potentially will be forced into upgrading (e.g. paying Apple for more storage capacity). Worse, your data will have been forcibly migrated into “your” iCloud Drive (which means it’s also stored on Apple’s servers somewhere out there).

iCloud Drive’s tagline is “All your files. On all your devices.” Which is fine and dandy – but that’s exactly what Google Drive, Dropbox and others do just as well. Doing something as rash as moving all your files out of their familiar homes and into the cloud is something you need to put a lot of thought into – not just go willy-nilly with the defaults of an OS update and hope for the best. Understanding exactly how iCloud Drive works and exactly why you would want to take such a large step with your valuable data are things best thought out beforehand.

It’s like deciding who to vote for after the curtain closes behind you in the voting booth. Not the best way to handle an important decision.

« Looking To Save A Few Bucks? (And Who Isn’t??!?)
Firefox – Maybe it’s Time to Move On »
View more posts from this author